I didn’t think blogging would be so much fun. It seemed to me that the latest job title of Social Coordinator you see popping up at various companies was nothing more than a nerdy teen seeking pay for time spent on Facebook and Twitter. Well, it’s actually pretty awesome. What I like most is the modular appeal of the blog layout: how you can simply change colors and text and move “widgets” of your choice from left to right. It’s quite fun. Anyway, getting to my point. We added an option to subscribe to the blog for all our avid readers out there. On the right hand column you’ll find it at the bottom; it’s the last item.

Now, for a behind the scenes look at our blog writing: It took Dylan and I nearly 30 minutes to perfect the wording for the email subscription widget. We tried titles like “Blog subscription” and “Subscribe to blog updates.” Then they through you for a loop with this optional text to display. Should we have text? But it’s optional….but why not? Well, what will the text say? It has to be clever and witty…is that punctuation correct? Now the hard part: the text for the button. “Subscribe” was so blasé; surely we could do better. “Go go gadget good stuff” was runner up, but lost in the end. We needed something perfect, something to tie it all together.

We hope everyone is enjoying the blog. The comments are wonderful and it’s so good to hear from everyone. Sending love to you all! 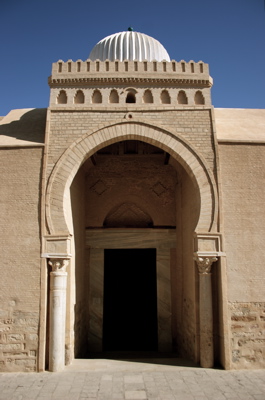 On Friday January 29th, we rewarded ourselves with a day trip to the city of Kairouan. Considered the fourth holiest Islamic city, many Muslims will make pilgrimages to Kairouan much like they would travel to better-known Mecca. Although we weren’t on a spiritual journey, we made the trek for a glimpse of our own.

Every part of the day was a bit of an adventure. We started by taking the train from La Marsa to Tunis. Next task was to find the Moncef Bey louage (shared taxi) station. Locals informed us that this would be the quickest and cheapest way to travel long distances, like to Kairouan. We hailed a taxi and told the driver our destination. He nodded and replied with one of  the two English word in his vocabulary, “five dinars.” Dylan recognized that we were being taken advantage of and refused. He instructed the driver to turn on the meter (required by law). The driver grumbled, gave in a little, and lowered his price: “three dinars.” Upon insistance from Dylan, he reluctantly turned on the meter and we were on our way. Twenty blocks away, we paid under one dinar and entered the louage station.

The louage station was insane: hundreds of large white vans in a huge warehouse, people milling everywhere, and men shouting destinations while funneling customers toward vehicles. We paid for our tickets, climbed into a van with six others, and within ten minutes we were on our way. (The louages leave when full, not on a set schedule. It doesn’t seem to take long.) During the ride, Jenna listened to PRI podcasts while Dylan read from his Kindle (typical commute entertainment). Considering we were expecting a three-hour ride, we were pleasantly surprised 90 minutes later when it seemed we had arrived (we asked another passenger in broken French just to make sure it wasn’t a pit stop).

We stepped onto the streets of Kairouan with camera and Lonely Planet in hand. Due to the many famous sites frequented by tourists in Kairouan, a system was set up allowing all to be seen with a single ticket. We headed toward the Mosque of Uqba, or the Great Mosque, to get our tickets. Now, it’s Friday, remember? Friday is a particularly holy day to Muslims so of course when we arrive at the Great Mosque (arguably the reason to go to Kairouan–besides the carpet shops and famous pastries) it is closing in a mere ten minuets. We catch the end of a tour (in English!) from a nonchalant distance, snap a few photos, and are promptly shooed away for the arriving devout Muslims.

Over the next few hours, we wander aimlessly through Kairouan’s medina snapping photos and enjoying a gorgeous sunny day. Spaghetti aux fruits de mer and couscous fuel us for the afternoon. With no particular plan, we hope to run into a few more of the sights we paid 19 dinars to visit (we never do). Originally thinking we may stay over night in Kairouan, we reevaluate our plan and decide to head back to the louage station. Feeling like pros, we find a van and soon we are on our way back to Tunis. Tunisians are naturally generous and a fellow passenger shares pastries with an appreciative vanfull.

This day marked the first of many intended day trips, both for sightseeing purposes and to capture video and photos for projects assigned by Karim. Weather permitting, the next stop will be the Roman ruins of Dougga. Stay tuned.

Tuna, or thon, as we say in French, is crawling (er…swimming?) all over Tunisia. It’s a huge industry here in Tunis and you can find it everywhere and on everything.

Tuna sandwich for lunch? Every other day.
Tunisian brik with tuna? A tasty snack.
Pastries and croissants filled with tuna? At every corner café.
Tuna pizza? The greatest idea ever. (Just ask for a “Neptune,” pick off the olives and give them to Dylan.)
Chuck of tuna on your salad, soup, pasta or (fill in the blank)? Yes, please.

We aren’t sick of tuna yet, but perhaps when we move on to the Czech Republic (two short weeks!) we will welcome the changing diet trend toward meat, cabbage, and dumplings.

Oh, and don’t even get us started on the obsession with the spicy and delicious  harissa.