Carthage is a town near La Marsa and, like Dougga, has been made famous by its ruins (in this case a mix of Carthaginian and Roman).  It’s truly a beautiful setting, right on the Mediterranean, but unfortunately the location isn’t as well-preserved as Dougga. We spent a half day there, seeing the usual sights and arrived by our favored transportation method: TGM train. First stop was the Carthage Musuem atop Byrsa Hill. 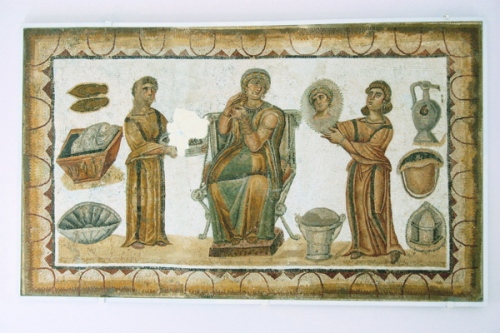 The ruins at the Carthage Museum aren’t overly impressive (although you would think they would be for the 10 dinar entrance fee).  Once we got inside, we realized 9 of those dinars pay for the view alone. Stunning. As we are fairly easily amused, the highlight of the museum was the scale models of ancient sites furthering the long-held aspiration to become an assistant to an architect (and forever construct miniature buildings…so fun).

We walked down the hill right to the edge of the Mediterranean to visit other ruins. This included the Baths of Antoninus Pius and a (smaller than Dougga) theater. Along the way, we stopped to visit an art gallery displaying the work of a Scottish friend we’d met at one of the libraries in Tunis. (This friend actually drew/painted a piece just for us and we are shipping it home! It’s incredibly beautiful and maybe the coolest thing in the world.) After chatting up the gallery owner and enjoying the art on display, we continued our walk through Carthage. The 4.5 acres occupied by the Baths were like a mini nature park and a nice relief from familiar concrete Tunis life. Despite the signs pleading with children to not climb on the ruins, they couldn’t help but do so and document it all on their cell phone cameras.

To close out the evening, we hopped back on the train and met our friend Mohammed in the tourist-clad town of Sidi Bou-Said. We sampled bambaloni (a fried doughnut akin to an ‘elephant ear’). At a café overlooking the marina, we watched the sunset and shared conversation and chicha. 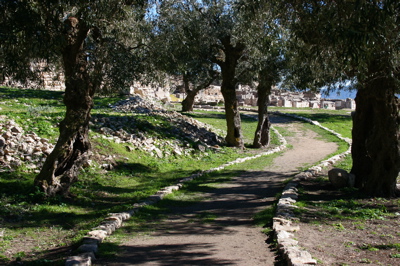 On February 3rd, Dylan and I traveled a couple of hours southwest of Tunis to the famous Roman ruins of Dougga.  We traversed by bus,  sweeping through some of the most exquisite rolling hills and rocky outcrops I have ever seen. There is something captivating about sheep herding in olive groves and it’s possible that I have found my life’s calling.

Before traveling to Dougga, I had glanced through Dylan’s photos of the ruins from his study abroad in 2006. They were, as I remembered, beautiful and awesome, but I realized you can only take so much from photo. There is no sound or depth to help you understand a place.  I was expecting our visit to instill in me the same sort of ordinary appreciation I gained from those pictures.

We arrived through a somewhat circuitous route, passing through the nearby town of Teboursouk and arranging (at this point, we hope) for a private taxi to deliver us and collect us from Dougga at predetermined times. (This is in fact the only way to get to Dougga, besides, of course, walking up the 10km road and avoiding the entrance fee booth altogether, as we later learned from our new British friend.) We gathered provisions and our taxi drove on; all the way we  were confirming our pick-up time and agreed price with the monosyllabic French words found on page 328 of Lonely Planet Tunisia. 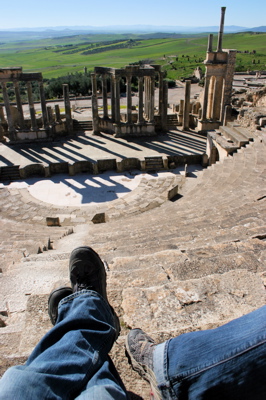 We had left the apartment early that day and arrived at Dougga while the morning birds still sang and the Japanese tour buses had yet to arrive. It was quiet and it felt as though we had this giant playground all to ourselves. The sun warmed my core and I began shedding the extra layers (Dylan’s extra layers) I had added during the chilly bus ride. As we climbed the crumbling steps of the broad Roman theater and stepped back to soak up the view, a sense of peace and contentment came over me. Everything felt so big. Solid. Protective.

We spent the next five hours walking through mazes of stone roads and wandering down olive tree lined pathways. The scope of Dougga is expansive. We wanted to pitch a tent just outside the ruins and stay there….indefinitely. With our guidebook in hand, we made some attempt to learn about the architecture and history by following a recommended tour of the impressive structures. It wasn’t terribly long until we closed the book, opened our eyes, and decided to just e x p e r i e n c e. Naturally, napping in a clover field surrounded by fluted Roman columns seemed decidedly appropriate; we reveled in the opportunity. 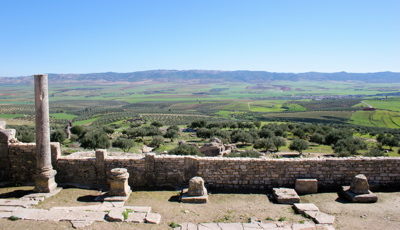